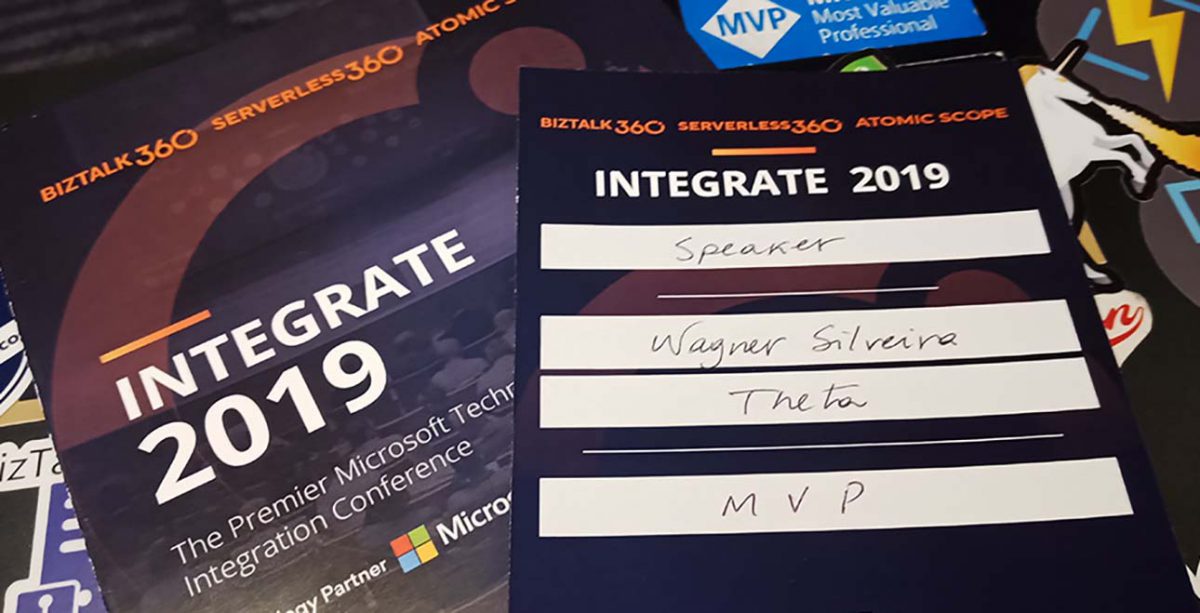 I was on my flight back from London, returning from Integrate 2019, when I started this blog post. It was a very long flight, around 24 hours each way, but even if the jetlag hit me really hard this time around, it wsa worth it. Integrate grew from an initiative from a group of BizTalk MVPs, into the premier conference for Microsoft Integration technologies. It was my honour to be a presenter for the third year in a row, presenting alongside a Microsoft team comprised of Product Managers, Architects and Engineers – the people that actually design and implement the technologies I use on a daily basis – and legends from the Microsoft Integration community like Sandro Pereira, Steefan Wiggers, Richard Seroter, Michael Stephenson and Kent Weare, just to name a few.

The conference is run by Kovai Co – the company formerly known as BizTalk 360 – as a very well oiled machine. A large team from Kovai dedicate months ahead preparing the conference. This edition of Integrate was the largest yet, with over 480 participants, with 26 speakers and 28 sessions, across 3 days.

If I had to choose one theme from the conference this year, would be governance. Seems like most of the integration related technologies got to a stage where the core set of features are available and companies are using them actively. All that activity highlighted the requirement for better tooling and guidance around various aspects of the governance of the platform. From DevOps guidance to security and bettern integration between on-premises and the cloud, pretty much every product group had recent or new announcements around that theme.

The keynote from Jon Fancey, Principal Program Manager of the AIS platform, highlighted that integration became so ubiquituous now that it is not restricted just to the integration specialists anymore. A movement seen in various companies today is having the integration team morphing into centers of excelence, which instead of having as their main focus implementing projects, it put as principal objective provide reference architecture guidance, governance and project overseeing, leveraging of the easy of adoption and fast pacing that the cloud technologies in special can provide, empowering all teams in the business to innovate through integration. That is probably due to the fact that, according to Jon Fancey:

“Integration has become so broad, so prevalent, so essential, that the meaning of integration itself is changing.”

The presentations from Ramak Robinson, Area Integration Architect of H&M showcased exactly that journey on their team. Ramak showed how H&M integration platform changed very quickly from a typically on-premises platform to a hybrid platform supporting both cloud and on-premises integration solutions, and discussed how their center of excelence supported the business through this ongoing journey.

Highlighting how integration is now prevalent and democratized across all facets of the business, Daniel Ferreira – a Cybersecuity Data Analyst from Shell Corporation – showed how the AIS platform supported his team to become more agile when dealing with threats and forensics investigation on remote computers. The solution, which is centered in a Cyber Security Chatbot with the backend fully implemented in AIS technologies, allow cybesecurity professionals from Shell to securely and consistently connect to remote machines to investigate alerts generated by the company firewalls and intrusion alert applications. The ability to connect through a reliable, repeateable and secure channel to retrieve information to confirm the existence of security incidents in Shell’s network, reduced a lot the response time of Daniel’s team. The important fact on this use case is that, although Daniel and his team are not integration experts, they still could take advantage from the AIS platform, thanks to its intuitive interface and secure environment.

Logic Apps have some big tickets in the pipeline, currently, after just have made Integration Services Environment Generally Available during the Build Conference. Between those items, the ones that caught my attention were:

The API Management team provide great improvements on the platform this year, by making the consumption tier generally available – this tier, which comes with 1 million free API call per Azure subscription, lowers the entrance barrier for client and projects requiring a API Management solution, but lacking the volume and budget to justify a dedicated instance. The solution is aimed to solutions that requirement mainly an API Gateway, as opposed of those requiring a discoverablo solution, since this tier of API Management do not provide a developer portal. Using the consumption tier in conjunction with logic apps, azure functions and event grids, developers can now create a serverless solution from the API facade down to the service orchestration, including events publishing and subscribing mechanisms. The other big announcement in this area is that a self-hosted gateway. The component will be implemented as a gateway component that will be managed by the portal online, but will be running either on-prem or on other clouds as a container.

The ability to safely publish API changes to different environments is one of the challenges for API Management. To help with this Microsoft provided some guidance and tools, in the form of the APIM DevOps Resource Kit. The resource kit provides a series of ARM templates for managing all the components of API Management via ARM templates, a model for mastering and distribute those templates accross teams using a source control repository, and tools to either create new APIM Management templates from a OpenAPI specification, or to extract APIs implemented using the portal experience as templates.

Finally, just like Logic Apps, the development experience of API Management will soon be improved with the addition of a new VS Code extension. The extension will provide the ability to access API Management components, like APIs, policie, products, from VS code, and the ability to interact with those components. While the extension is still in private preview, it will be available for public preview soon.

There was one major announcement 0n BizTalk Server camp and that was the announcement that BizTalk Server 2020 was actively in development and would bring all common features currently available on Feature Packs 1 to 3. The new version of the solutions would bring parity with SQL Server 2017 and 2019, Windows Server 2019, Visual Studio 2019 and would also be provided as Azure IaaS.

The set of features is not complete yet, but from the new features list published, the following are the ones I am most excited about:

The messaging team provided updates on all their tools. From those the ones that caught my attention were:

Although there was not blockbuster announcements this year, with exception to the BizTalk Server 2020, which was received with a thunderous clap by the audience, showing how much the product is still active and loved by customers, this year announcements felt more like the fine adjustments on a technology that is becoming mature and widely used. So the focus is shifting to DevOps and security, to simplify the implementation, deployment and maintenance of the AIS platform.